Daniel Kahneman is the only psychologist to have ever been awarded the Nobel Prize for his contribution to science.  When asked what he believed to be one of the best ideas ever generated by psychology, he responded with an insight that was produced by another eminent psychologist, Kurt Lewin, who is recognized as the father of social psychology.  It is an insight leaders should know and use.

Lewin viewed behavior as being in equilibrium, meaning our behavior is shaped by driving forces that push us toward a behavior and restraining forces on the other side that hold us back from a behavior.  When we want to change behavior – be it our own behavior or that of another for professional development – humans have a natural tendency to add driving forces.  Such driving forces come in the shape of convincing arguments, incentives, or threats as we attempt to push toward behavior change.

What Kahneman so brilliantly points out is that when we get behavior change by the addition of driving forces, i.e., when we try to “push” individuals in the direction we want in terms of behavior change, we will have increased the tension in the situation.  Imagine a given behavior as a large inflated ball. 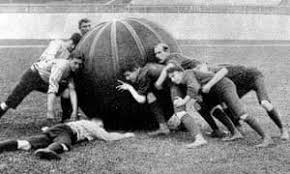 We are likely to add driving forces when we ask ourselves the question, “How can I get him to do it?”  There is an alternative that Lewin and Kahneman brilliantly point out: considering the question, “Why is he not doing it already?”

Let’s consider a simple example: we want a supervisor to be better at holding staff members accountable, including having hard conversations with poorly performing employees.

We can try motivate the supervisor to address this issue by persuading (guilting) them as to the unfair impact their failure to act is having on others, offering them a reward if they address the issue, or telling them their job may be in jeopardy if they do not improve.  All of these approaches are examples of trying to engender behavior change by adding driving forces.

Alternatively, we could consider what is preventing the supervisor from addressing poor staff performance, and try to eliminate or reduce those restraining forces.  Examples might include a lack of confidence as to how to hold an effective performance conference, a misunderstanding (or lack of understanding) of how to use progressive discipline, or a number of what MindSet calls cognitive blunders (e.g., conflict is terrible; everyone must like me; when my staff fail, I fail).

When we propel behavior in the direction we want by the removal or weakening of a restraining force, not only will the new behavior emerge with less tension, but the new behavior will be more stable and lasting.  This occurs because when we motivate behavior change by the addition of driving forces, having not reduced any of the restraining forces, the behavior is prone to snap back to the original position at first opportunity should any of the new driving forces we added be reduced, eliminated, or see their impact dissipate.

Bottom line: When your goal is behavior change for professional development, consider how you can remove roadblocks before trying to smash through barricades.