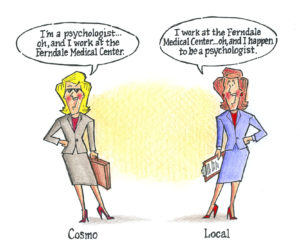 Great cultures are built on a foundation of Locals: individuals who are excited about, and actively promote, the success of their colleagues.  Cosmos can contribute to organizational success, but they need to be managed a bit differently and only as a last resort should they be put in a supervisory position.

But it is worth exploring the degree to which this Cosmo versus Local distinction is an inherent and persistent trait within a given individual.  Or is it perhaps more of a situational, attitudinal state that can be modified by effective leadership?  (In psychology we call this the state-trait argument.)

Many have long assumed that a Cosmo is strongly predisposed to remain a Cosmo – but I have increasingly seen instances that have persuaded me that is quite often not the case.  Rather, it appears that the creation and maintenance of a Cosmo often results from an interaction between an individual’s inherent personality and the specific environment within which we place that individual.  The awkward psychological term for this phenomena is reciprocal determinism.  Let me explain.

When individuals are part of an organization that is dysfunctional – i.e., having an unhealthy culture where success is rare and credit is seldom shared – it becomes adaptive for them to become focused on their our own survival, including assertively grabbing for scarce credit and avoiding blame for abundant failure.  If you play on a ball team that loses 90% of its games, there is little motivation to tie your ego to the success of the whole – the fact is that there is precious little success emanating from the whole!  In that situation, it’s not surprising that individuals will become more and more concerned about their own stats.

We sometimes see this pattern in professional sports where an individual may be deemed a problem teammate on a team that is not doing well, but then when traded to a high-performing organization where that same prima donna becomes a better teammate – often not perfect, mind you, but better.  We might call these folks “state Cosmos.”  Of course the people we want to be in a foxhole with are the “trait Locals” – those who remain utter and completely genuine Locals even when playing for a losing team.

This insight – that Locals can be created by highly prideful environments – serves to once again highlight the importance of leaders taking active steps to build a deep and genuine sense of pride within their organization.  That young Marine may well start with big personal ego – but that personal focus is ultimately overwhelmed and consumed by their even greater sense of pride in being part of something far bigger and more impressive than themselves: the US Marines Corps.

I recently heard the author, Simon Sinek, comment on how interesting it is that a Marine will give his life for another person he doesn’t even like: while in corporate America we find many situations where employees won’t even give away credit for a single sale to someone they work right beside every day.   There is something in the training Marine recruits receive, and the leadership they experience, that creates the prideful results in the Local orientation Simon highlights and is critical to the success of the whole organization.

One last quick thought I want to share with you relates to the element of trust.  It is almost impossible to build a sense of pride within a staff if they do not trust their leaders.  Here’s the insight: You do not have to be right in your decision-making to build trust – you simply have to be open with respect to process and honest with regard to personal accountability.  Overcome the cognitive blunder of, “How can they ever trust me if I make mistakes?”  The fact is that few employees expect perfection from a leader, and they are naturally drawn toward leaders who seem not only competent, but genuine.

Your colleagues will accept errors and mistakes – but they will never trust those who try to cover up their mistakes or deflect responsibility to others.  Most of us know this, but many of us have to overcome the natural survival instincts of Bart Simpson, (i.e., “I didn’t do it, no one saw me do it, maybe someone else did it, you can’t prove anything!”) to deny, cover, argue, or deflect..

Now, you don’t get a total pass on mistakes.  Making repeated errors can and will hurt your credibility and lead to a loss of confidence in you from your staff and colleagues – but that is different than the loss of the more fundamental element of trust.

So – two big factors: trust and being prideful.  In combination (and you will not likely be successful at building pride until you have earned trust), they can be potent enough to transform a few initial Cosmos into a new batch of valuable Locals.  This explains why companies with exceptional cultural health and sky-high levels of pride seem to be heavily populated with Locals.  Yes, they likely hired a good number of Locals, but they also likely created a good number as well…an accomplishment that leads to greater business success.