Recently a Chick-fil-A opened up in my hometown of Bellevue – and I have quickly become a Raving Fan.  Yes, the chicken sandwich is good – but it is not the food that has me so impressed.  It is the remarkable employee performance – not on some occasions, but every single time I have walked in or driven thru. 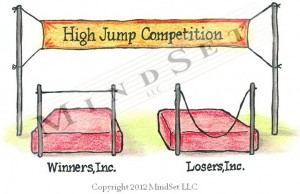 It is hard to argue that it can’t be done that well when Chick-fil-A does it every day, every time.  So it begs the question: has every other fast food restaurant in Bellevue learned from Chick-fil-A and upped their game?  Ummmm – not that I have noticed.  (Yes – I frequent them a lot…this post may not reflect all that well on my eating habits, but now I hope you see that I go to them for the purpose of doing MindSet research.)

Another example:  QLI, the remarkable brain and spinal cord injury rehabilitation center in Omaha, has five times been recognized as the #1 Best Place to Work in the city.  A nice honor and richly deserved – and one that you might think would bring great interest from others in the medical field who would want to learn from QLI’s success.  Nope – in fact the industry continues to this day to often bemoan the poor culture in their workplaces and review the laundry list of challenges that make it impossible for them to aspire to much beyond mediocre.  Yet with one notable exception: the leadership of the Boston Home traveled from Massachusetts to Omaha to learn from QLI leaders.  The result has been the implementation of several changes that have revitalized the culture of this long-standing and important provider in Boston.  But here the exception proves the rule: individuals, and systems, resist change.  It is easier for them to rationalize, dismissing the occasional oasis such as Chick-fil-A or QLI as an outlier, rather than acknowledging a new standard that can be achieved.

Building and protecting a great work culture is hard work – and sometimes complex.  But when looking at Chick-fil-A and QLI, two basic and simple (but so important) factors stick out as contributing to their success.

The first is that they set High Standards.  They understand that employees (or at least the employees they want) will be motivated if they feel they are part of an enterprise worthy of their best performance.  They also understand that humans have a tendency to play up (and down!) to the competition – or in this case up to the standards set by their company.  Thus, performance standards (including attitudinal factors!) are rigorous.  Supervisors work hard to help employees meet those standards – BUT the standards are not negotiable.

The second factor is a focus on consistency.  EVERY time I drive up to that speaker outside Chick-fil-A I know I am going to get a prompt, warm, and amazingly courteous response from whoever takes my order.  If I am inside – the tables are clean and it is just a matter of time until a staff member walks by to make sure all is good or to see if I would like a refill.  These exceptional companies make sure their employees understand what MindSet terms the Mystery of Average.  The player who scores 25 every third game, but disappears for the next two, is fun to watch and often fancies himself a Star – but your team is likely to suffer.  Great companies are built on a foundation of employees who are dependable, reliable – they can be counted on to show up and consistently meet and exceed the high standards of their company.

Drive thru at a Chick-fil-A – even if only for a coke or some wicked chicken salad – and enjoy a glimpse of a company that gets it right when it comes to understanding employee performance.